For the past 115 years, Christians have come together each January to observe and celebrate the Week of Prayer for Christian Unity.

The founders of the Society of the Atonement, Servant of God Father Paul Wattson, SA, and Mother Lurana White, SA, were pioneers and champions of Christian unity, having worked tirelessly throughout their lives to realize Jesus’ prayer at the Last Supper “that all may be one.”

The celebration was recognized by Pope Pius X, and in 1916, Pope Benedict XV expanded its observance to the universal church. The name officially changed to the Week of Prayer for Christian Unity in 1963.

Each year, Week of Prayer is celebrated with a different theme. This year’s is “Do good; seek justice,” taken from Isaiah, Chapter 1, verse 17.

Here is what our Friars had to say. “Week of Prayer means everything. One of the fundamental reasons why we were founded as a community was to pray for the unity of Christians. This time of prayer and fasting that Father Paul called the community to participate in is something that we’ve really participated in from our earliest formation process. As soon as January 18th to the 25th comes on to the calendar, you know this is a special time, like Lent is a special time.

“It’s a time where you are just conscious about how important it is to pray for the unity of all Christians, which is right in the fiber of our being, as Friars. We can have unity in the diversity by believing in one another, by listening to one another, by being attentive to what are the issues that the Churches or the people bring forward that need to be integrated.

“We need to continue to pray that we are all working together for the benefit of the whole human race – for whom Jesus died and rose from the dead.” 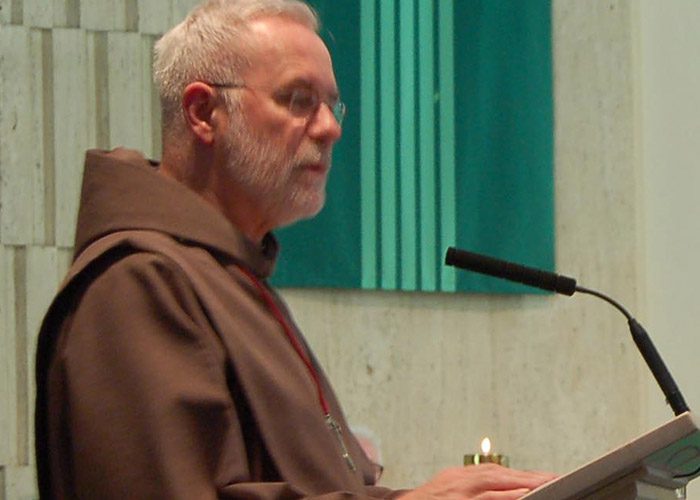 “’Inured’ isn’t a word we get to use very often, but it’s a good word to use when trying to describe the quest for Christian unity. Truth be told, what is now the Week of Prayer for Christian Unity (formerly the Church Unity Octave) was for many of us our first experience of ecumenism – a point of entry, so to speak.

“Sadly, too many of us have the impression that the ecumenical movement has gone as far as it can go! We need to revisit the high priestly prayer of Jesus at the Last Supper and take it seriously knowing, however, that prayer changes us, not God.” “Growing up in a small city, Amsterdam, New York, our parish celebrated the Week of Prayer for Christian Unity each year, thanks to the efforts of our Sisters of the Atonement, who ministered there.

“So, I first came to know of this important prayer in the context of my parish. Its celebration provided an occasion to learn about other churches in a time before the Catholic Church’s involvement in the ecumenical movement. It was before the Second Vatican Council. So, I feel extremely lucky to have been introduced to a new way of thinking about other Christians. Hence, I am very grateful to our Sisters of the Atonement for this gift.

“Now at a distance of over 60 years, thanks to the Friars, who have given me the opportunity to deepen my knowledge theologically about the issues of Christian unity, I realize, as the Council teaches, the vocation of all baptized Christians is to pray and work for unity of Christians.

“In Italy where I live and minister, the materials for the celebration of the Week of Prayer are prepared and distributed by the Centro Pro Unione, a ministry of the Friars of the Atonement. In that material, we add the phrase after the Week of Prayer – and all the year! This means that our prayer for unity is not just for one week out of 52, but every week in the year. This is so, because Jesus prayed for that unity and we, in obedience to that wish, need to do so until that unity is achieved.

“One thing that I have learned over my years as a Friar is that once you have prayed together, you are never the same. The Holy Spirit, who allows us to cry “Abba, Father,” unites not only our voices but also our hearts in a chorus of praise. Prayer is transformative and prayer for unity sets us all on the road to fulfill that prayer of Jesus for unity so that the world may believe.

“Finally, the prayer for unity is for me personally a way of learning how to overcome the obstacles that impede us from fulfilling that prayer of Jesus. So, the Week of Prayer for Christian Unity is not about “saying prayers” but about listening to God in the Spirit who will lead us to “becoming prayer” in action for the unity of all those who are members of the one Body of Christ.

“St. Bonaventure taught that St. Francis, after seeking to understand the love of Jesus, who died for a sinner like himself, and in imitation of that love received, would become prayer. I try to do this in my own life, which is why the prayer for unity is a guide for my living and ministering as a Franciscan Friar of the Atonement.” Servant of God Father Paul Wattson SA, sent his Friars on a journey and quest for the dream of the fulfillment of Jesus’ desire “that all may be one.” This journey has led the Friars in our mission and ministries for many years.

As a Friar of the Atonement, I seek to share in this quest for Christian unity. I find that I try to live in the dream of Fr. Paul following his admonition to the Friars to “do all the good you can, in all the ways you can, and whom to whomever you can, as long as God gives you the spirit and joy of service.”

As we celebrate yet another week of prayer in 2023, may we “Do good and seek justice” to make real the journey of Christian Unity.

“The first thing, for the Week of Prayer for Christian Unity, would be the fact that it was our founders’ inspiration that actually brought it to the Universal Church. Our founder (Father Paul) had a great desire to reunite the Anglican Church and the Roman Church, and that began even when he was an Anglican priest.

“When he did come over to the Roman Church, was accepted into the Church, he still felt that need to work towards that unity. And I think that’s something that is so important for us, not only in that religious context of two Churches that came out of the same roots; separated, and then asking God to bring them back together again.

“It’s so important today, in our society, because right now there are more people saying and doing things that actually divide people instead of bringing them together. The Week of Prayer for Christian Unity – if people could listen to the prayers, listen to preaching and understand the fact that truly, God wants us to be one. There may be different ways right now of us getting to God, but ultimately, His desire is in his prayer ‘that all may be one.’” “For (Father Paul) to come up with the idea of Christian unity was revolutionary. He could only have been inspired by God to do that, because it wasn’t in anybody’s train of thought.”